Atlantic City in the Red 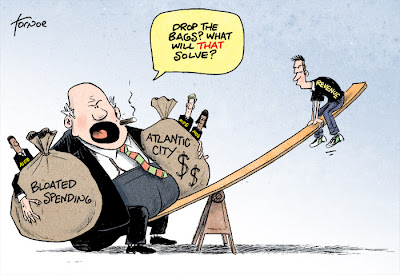 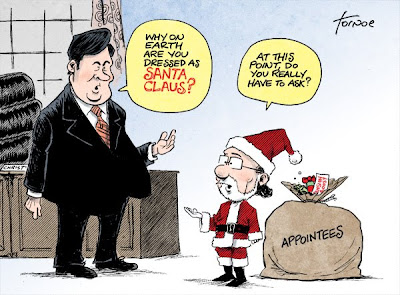 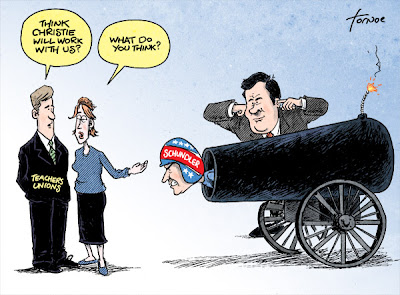 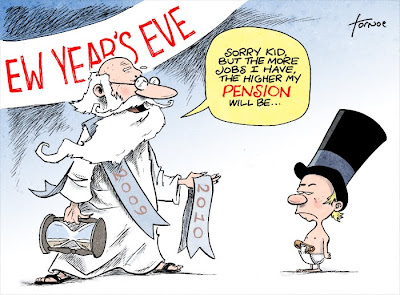 Let's all hope that 2010 being change to New Jersey that's desperately needed. For starters, we can get lobbyists out of the state pension system.

Tornoe toon: Chris Christie - Change We Can Believe In 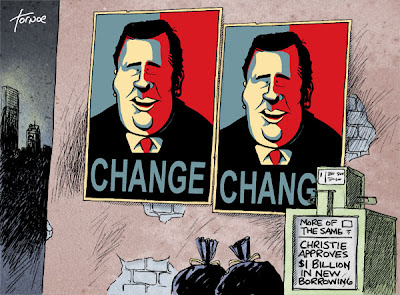 My latest cartoon on the ridiculous 6-figure sick-time payouts NJ gives to some outgoing employees... 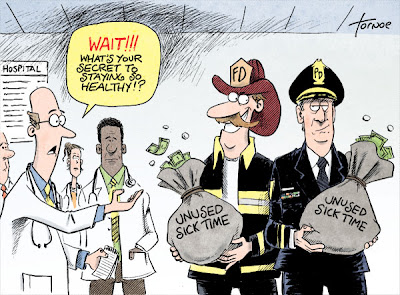 Tornoe toon: Daggett Gets a Little Help From His Friend 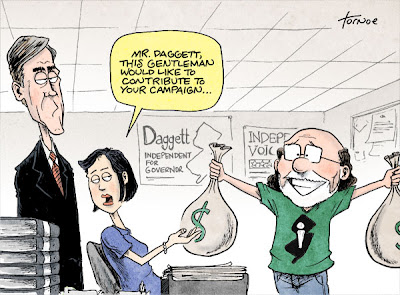 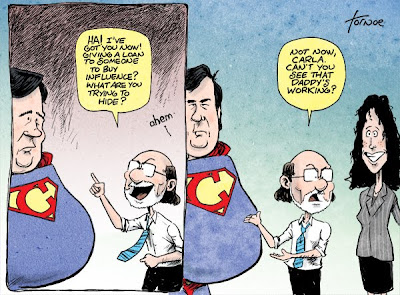 Republican gubernatorial challenger Chris Christie has gotten into some hot water over a $46,000 loan he gave to Michele Brown, the first assistant U.S. attorney.

According to Jon Corzine, this loan presents "an appearance of a conflict" of interest.

However, there's no word from Corzine about giving a $470,000 loan, and then paying off that loan, to the then head of the state's largest labor union, and what "appearance" of a conflict" that might present.

And let's not forget that Katz’ $1.1 million condo purchase came at the same time negotiators for her union and the Corzine administration were entering intense negotiations over a new contract for state workers. Katz was president of the largest of five Communications Workers of America locals that are about to vote on the four-year deal.


I wonder if Christie has emails from Michele Brown that he's keeping a secret as well... 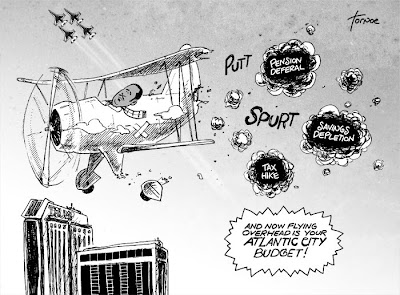 Here are some numbers from Michael Clark's Press of Atlantic City piece:

• The city has to defer more than $6 million in payments to the state's pension system, leaving a large hole that needs to be filled next year.

• The budget includes an $11 million increase in taxes

• The city had to raid their piggy bank to pay for the budget, depleting their surplus by $9 million, all the way down to $850,000.

But hey, at least the air show was cool. 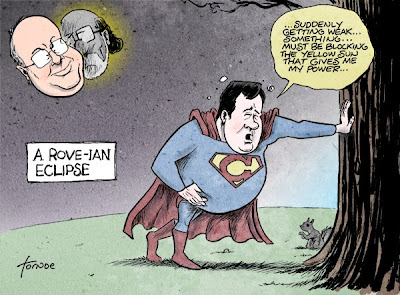 Obama Comes To Save the Day... 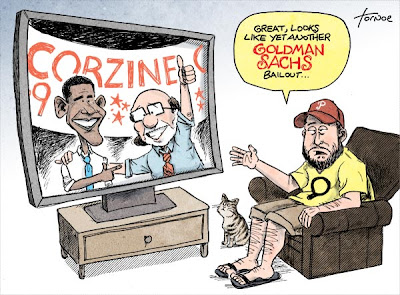 An interesting take on Obama's trip to New Jersey to help rally the troops behind wounded governor Jon Corzine, via In the Lobby:

“This New Jersey thing, by the way. This is one of those boxes he has to check as leader of the Democratic Party. You don’t do a rally with 17,000 people in July unless you don’t want to be doing that rally with 17,000 people in October because you’re worried that guy is not going to win. They’re getting it out of the way," said Chuck Todd, political director of MSNBC, analyzing President Obama's trip to New Jersey.(7/17/09)

My Toon: Chris Christie Gets His... Girl 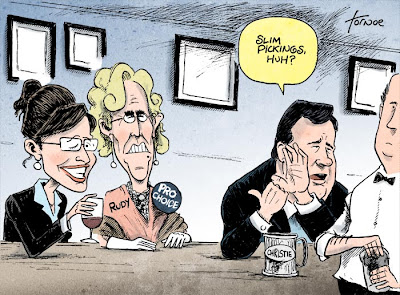 Who Will New Jerseyans Choose in November? 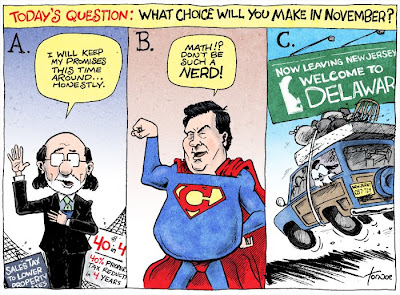 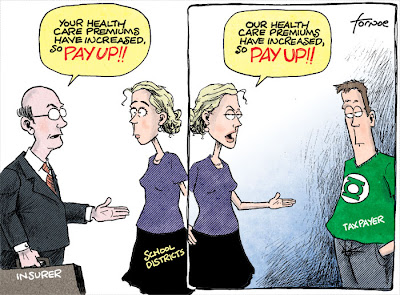 The Star-Ledger has reported that health insurance premiums for more than 250 school districts in New Jersey could increase by as much as 20 percent next year.

So this means that the teachers will just pay a bit more for their health care coverage, right?

Which Republican is Corzine Pulling For? 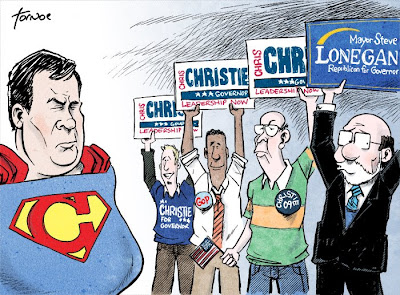 While the Steve Lonegan/Chris Christie youTube battle rages on, a new Lonegan backer is coming out to support his pick for the GOP nomination for Governor - Jon Corzine.

A Washington-based political organization with ties to democrats is running ads attacking Christie, the Republican they consider more formidable, in an attempt to knock him out in the June primary.

The ad, released by the Mid-Atlantic Leadership Fund, highlights the Wall Street entanglements of Christie’s younger brother and suggests the former U.S. Attorney improperly used his connections to bail him out of trouble.

“This week is a stark reminder of how Jon Corzine operates,” Chris Christie Campaign Consultant Mike DuHaime told PolitickerNJ.com. “Taxes are up, unemployment is up… The only thing going down are his polls numbers. Clearly this is an effort to influence the Republican Primary. Jon Corzine may have bought the Democrat Party, but he will not buy the Republican Party.”

Atlantic City Casinos: It's Only a Flesh Wound 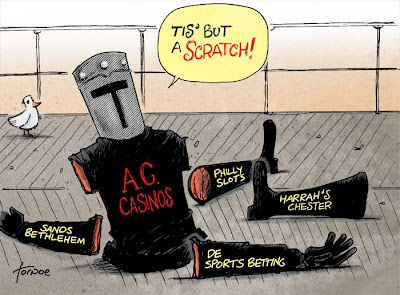 As if the times weren't already tough enough for the casinos in Atlantic City, Delaware Governor Jack Markell has signed his controversial sports betting bill into law, paving the way to sports betting and table games to make their way to Delaware's 3 racinos (one of which I pissed off with this cartoon).

Atlantic City’s casinos have been taking a beating, with gaming revenue down 15.7 percent for the first four months of 2009 and headed for a third straight year of declines.

It's estimated that table games in both Pennsylvania and Delaware would cut into Atlantic City’s $4.55 billion annual gaming revenue by about 5 percent, although he has also calculated a worst-case scenario of about 10 percent.

If Atlantic City wants to survive, it needs to get on the path following Las Vegas to a family destination. Atlantic City still offers something that no casino in the surrounding area can ever compete with - the beach.

Unless the Delaware racinos, protected by a state-run monopoly, get smart and build a casino at Rehoboth Beach.

The Stacked Deck for Delaware Racinos 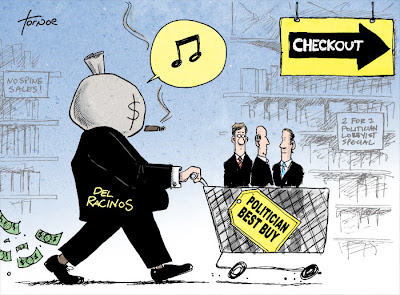 Delaware state senators Thurman Adams and Gary Simpson are unpaid directors and members of the Delaware State Fair executive board and hold non-dividend fair stock from Harrington Raceway & Casino, who alongside Dover Downs and Delaware Park have lobbied strongly against Markell's sports betting bill, saying that increasing the state's share of the gambling monopoly will cause them considerable financial stress.

As the News Journal recently pointed out, Harrington recently went through a $35 million expansion and renovation, hardly indicative of a business in stress.

Harrington has also entered into a long-term contract with its operator that guarantees an accelerating increase in annual payment while the racino moves to become its own operator. According to a News Journal editorial, the management firm will be getting paid to watch itself lose the Harrington contract.

Harrington's stockholder list reads like a who's who of Delaware politics. No wonder they always get what they want.

As an added bonus, here is Delaware Governor Jack Markell appearing on ESPN's E:60 show discussing the issue of sports betting. One thing I found interesting was the NCAA admitting that allowing Montana, which does have a sports lottery, to host NCAA post-season games and events was an “oversight” - and one they will correct. They of course are fighting to prevent any NCAA post-season games from occurring in Delaware due to the legalization of sports betting.

For Jon Corzine, it's 'Ghosts of Girlfriend's Past' 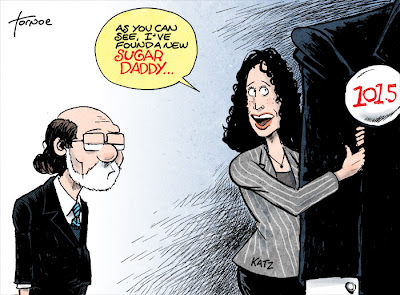 Man, would I have loved to be in Jon Corzine's office when he heard the news that his former girlfriend and labor leader leader Carla Katz is going to be doing spots on 101.5, New Jersey's most popular radio station. She starts Monday with an hour-long spot on the 'Jersey Guys' – Casey Bartholomew and Ray Rossi – one of the periodic appearances she’ll apparently be making on the station.

I wonder if she'll spill the beans on how much money Corzine actually gave her when he became governor. The New York Times estimated it at $6 million, including a $1.1 million condo, $500,000 in renovations to her home, her Lexus SUV and her kids’ tuition at a private school, just to name a few.

Most importantly, will she speak-up about the infamous email exchange she had with Corzine back when he agreed to give back the concession that CWA workers agreed to during their negotiations, which would have required retired state employees to contribute 1.5% of their pension toward their health insurance premium and would have saved taxpayers $2 million?

As Long as Voters Know who Jon Corzine is... 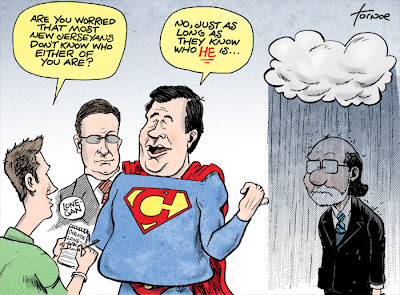 Governor Corzine's approval ratings continue to be upside-down as he struggles to close New Jersey's budget gap, but his Republican opponents for governor, Chris Christie and Steve Lonegan, have their own problems.

According to a poll conducted by Quinnipiac University, 56% of respondents haven't heard enough about Christie to rate him favorable or not. That number jumps to 72% for Steve Lonegan.

But as long as more than 50% of New Jerseyans don't approve of the job Corzine is doing, they should just continue to remain "the other guy."

Go to Rutgers to Watch Football, Not to Learn 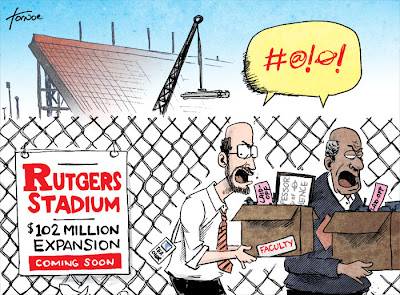 Due to state aid reductions in Gov. Jon Corzine's proposed budget, Rutgers University officials announced they will lay off workers, cut courses and raise tuition to fill a $60 million hole in the university budget.

Two things strike me as weird.

2: Why cut professors when your plunking millions into both a stadium expansion, and into Greg Schiano 's exorbitant contract, when the football program continues to lose money? (BTW- Schiano is the state's highest paid public employee)

Does Rutgers still want to be an institute for higher learning? It doesn't seem like it. All they're concerned with is profit, and they don't even seem good at that. 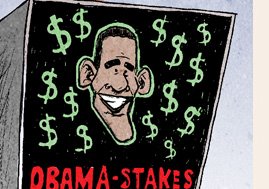 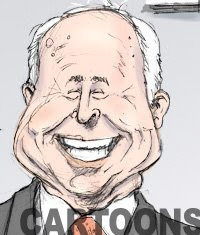 Click the image above to view my national political cartoons at Politicker.com

Draw your own cartoon!

Take a stab at drawing something of your own, and email it to me at rob@boltcomics.com. Once I get a bunch, I'll post them for everyone to see.